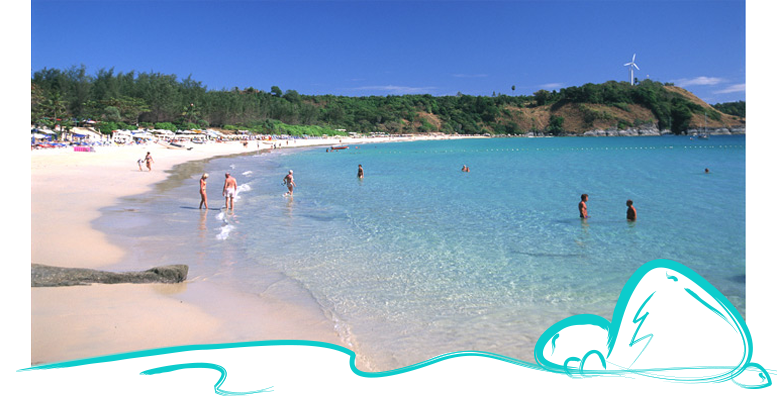 Phuket is the biggest island in Thailand, located in the Andaman Sea off southern Thailand. The island is mostly mountainous with a mountain range in the west of the island from the north to the south. The mountains of Phuket form the southern end of the Phuket mountain range, which ranges for 440 km from the Kra Isthmus. The highest elevation of the island is Mai Thao Sip Song (Twelve Canes), at 529 m above sea level.

One of the most popular tourist areas on Phuket is Patong Beach on the central western coast, perhaps owing to the easy access to its wide and long beach. Most of Phuket's nightlife and its cheap shopping is located in Patong, and the area has become increasingly developed. Patong means "the forest filled with banana leaves" in Thai.

Other popular beaches are located south of Patong. In a counterclockwise direction these include Karon Beach, Kata Beach, Kata Noi Beach, and around the southern tip of the island, Nai Harn Beach and Yanui Beach. These areas are generally much less developed than Patong, and sought out by individuals, families and other groups with a preference for more relaxed and less crowded environs than Patong.

Patong Beach: A beach on Phuket's west coast. It is the main tourist resort in Phuket and contains the centre of Phuket's nightlife and cheap shopping on the island. The beach became popular with western tourists, especially Europeans, in the late 1980s. Numerous large hotels and chain hotels are located in Patong. Patong Beach is maybe more famous for its nightlife than the 2-kilometer beach that runs the entire length of Patong. Nightlife is centered on two main areas Bangla Road and Paradise Complex, with Bangla Road being predominantly straight and Paradise Complex being predominantly gay. Much mixing of the two scenes occurs due to Phuket Island's tolerant nature.

Karon Beach: The second largest of Phuket's principal tourist beaches. Large resort complexes line the road back of the beach, but the strand itself, long and broad, has no development. The sand is very white, and squeaks audibly when walked on. The southern point has a fine coral reef stretching toward Kata and Poo Island. Restaurants, bars, tour companies and other non-hotel businesses are at the north end, near the traffic circle, and at the south, on the little road connecting the back road with the beach road. The narrow road between Kata and Karon has a number of small businesses as well as the Dino Park Mini Golf facility. Karon is the most up-scale of Phuket's beaches. Regular daytime bus service to and from Phuket Town.

Kata Beach: The smallest of Phuket's three main tourist beaches, Kata is different in appearance and style from Karon or Patong. The beach itself is broad and curving, and structures bordering it are low?rise. The waters are perfect for swimming, and at the north end is a coral reef with many varied corals and fishes which stretches out toward Poo Island., about 1/2 km off shore. Facilities for every price range include hotels, bungalows, tour companies, restaurants, bars and clubs. There is regular bus service to and from Phuket town during daytime.

Phuket Town: A small urban treasure full of surprises, many of which are not readily visible to the visitor simply passing through. To really appreciate many of the attractions here one has to spend time, hunt and often walk. The rich cultural heritage evidenced in its architecture is perhaps the foremost of attractions here. But there are also fascinating markets, Chinese shrines and Buddhist temples and shopping opportunities both modern and traditional.

The Two Heroines Monument: This is the most famous landmark of Phuket located about 12 km. off Phuket town. The monument comprises two statues of women standing side by side which were the two heroine sisters of Phuket -- Thao Thep Krasattri, the widow of the governor and her sister Thao Si Sunthon. The sisters courageously rallied islanders to repel Burmese invaders in 1785 when the town was without a governor.

Sirinat National Park: Located in the coast of Andaman sea, that’s why it rains all year round. There’s wet season from May to September and its time of northeast monsoon, which bring the cold wind into this area from November to April. It doesn’t low down the temperature but the rain from Ao Thai cool down the area. The marine environment of Sirinath is quite diverse and the coral reefs present in the bay are some of the most pristine found in Phuket province. The reefs are located about 700 to 1000m away from the shore near the park restaurant. The coral reefs are found in water between 4 to 7 m deep. Some of the marine species occuring include; Plate corals, Soft corals, Sea fans, Tree corals and Sea anemones.

Phuket Zoo: Be a guest of Phuket Zoo and get a close encounter with an amazing range of animals like thousands of crocodiles, many camels, tigers, ostriches, emus and other rare birds. This is a place that challenges your perceptions of life on earth. Watch varieties of birds inhabiting in Thailand amidst natural surroundings. Some birds can be fed from your hands. Find the beautiful world of orchids at our orchid garden where a large variety of orchid species are for your admiration and for sale. Discover on exotic world at our aquarium. Watch many species of colorful and striking sea creatures and interesting reptiles on show.

Phi Phi Islands: Located just 40 kilometers away from both Krabi and Phuket. They, in fact, administratively are a part of Krabi province. Regarded by travelers from all walks of life as being among the most beautiful tropical islands of the world, Phi Phi Islands have become one of the most popular tourist attractions in Thailand. In addition, the islands are famous as the location where the movie "The Beach" featuring Leonardo Di Caprio was shot. The islands, together with the nearby Noppharat Thara Beach, a total area of 390 square kilometers, were recently established as a national park. The examples of famous attractions are: Phi Phi Don, Phi Phi Le, Maya Bay, Viking Cave, etc.

Phrom Thep Cape: The southern-most point of Phuket Island and is (best in the dry season) the place to view the sunset. It is a stunning location overlooking Kho Man (Island) and several of Phuket's capes including Rawai, Yanui and Nai Harn Yacht Club. The name of the lighthouse here is Kanchanaphisek Lighthouse. Inside you will find a mini-lighthouse museum. Not terribly interesting and the views are not much better than from the landing. You can also see the monument to the Prince of Jumborn who, in 1880 was in the navy. He was the 28th son of Rama 5th. At the age of 13 he became a naval cadet in England. He returned 6 years later and built the first military base in Phuket.

Racha Islands: Two islands running roughly northeast to southwest off Phuket's southern coast: Racha Yai Island on the west coast is a fine beach closed in by the hill that stretch away from it like to arms of a horseshoe called alternately Ao Tawan Tok or Ao Bungalow. Clean sandy beach and crystal clear waters of Raya Yai attract day trippers from Phuket. From the top of the hill to the south of the bay is the viewpoint from which the whole island can be seen. On the east, at Ao Kon Kae Bay, is an excellent site for diving. Racha Noi Island, 10 kms. from Raya Yai, is the result of coral reef build up, and there are more rocks than beaches. In a small bay on the west is a boat anchorage. The waters at Raya Noi are emerald green, and fishing is famous, but swimming is not recommendable.